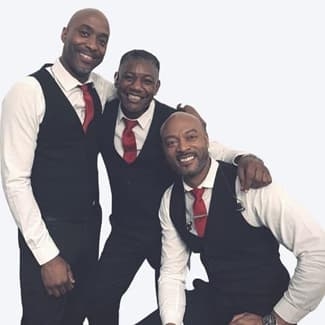 SoulTown Collective are one of the UK"s premier Motown acts, they are veterans of the industry with a fully choreographed show to give you the live & authentic Motown experience. Previously know as The Brothers of Soul, all talented male vocalists in their own right, individual vocal styles and intricate harmonies combine to deliver a contemporary "up to date" feel on the Motown classics performed by artists such as; The Temptations, The Drifters, The Four Tops, The Isley Brothers, Stevie Wonder....and many more.

Christopher Hall has been singing professionally for the past 10 years. He has acted and performed in leading roles in musical productions such as ‘Fame’. Chris delivers poise and sophistication with songs such as ‘My Girl’ and ‘Saturday Night at the Movies’, which also highlight his smooth and silky vocal tone.

Colin ‘Sugarfoot’ Mills has performed on a variety of platforms throughout his musical career. One of his standout performances was on the TV show ‘Stars in your eyes’, where he performed Billy Oceans: ‘Love really hurts without you’. Colin brings high-octane energy and entertainment to all his performances.

Neville Forbes has over 20 years professional experience within the music industry. He brings his signature vocals and harmony arranging skills to the Collective, in addition to his classic charm and natural charisma on stage. When asked about his passion for music, his response is always: "I just love to sing".

Paul Green adds the final "forth dimension" to Soultown Collective. Again another very talented vocalist with a smooth Pebo Bryson type vocal style, Paul brings to the group a wealth of vocal experience and has performed with various groups and bands throughout the UK and at some of the UK's most prestigious venues.  In addition to singing with SoulTown Collective, Paul can also be found singing lead vocals for another of the Midlands top soul band "Project 21"

SoulTown Collective as standard are a three-piece line up performing to Backing tracks to deliver that big band sound, they can also be booked as a four piece line up, in addition as per the video show reel they can also perform with a live band, subject to availability.

The overwhelming feeling from all those I have spoken to at Nestle, Musk and the other subcontractors who attended, is that the guys were excellent. Their ability to fill the dance floor was without question and keeping it full! The intervals where very professional and done very well. My personal view is I would book them without question and recommend them to others. We as in the (WT. Parker Group) are having a charity event we are organising as a group later this year and I will be recommending them to our Group Managing Director for that event. Please could you pass on mine and Paula's thanks, we are both very thankful for the  their delivery, friendliness and professional manner. In all a great event and the event raise in excess of £9,000.00 for a great charity! Jonathan Roden - Projects Director