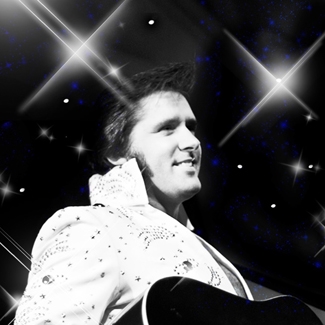 Kevin Paul provides an explosive and passionate performance with that all important Presley charm. His incredible energy and vocal ability combined with a magnetic stage presence, makes for an unforgettable tribute to The King of Rock & Roll.

Kevin Paul was a runner up in GMTV's 'Search for Elvis Competition' in 2001 where he eliminated nearly 5,000 contenders to become one of the countries most loved & respected Elvis Tributes.

Kevin is no stranger to TV and has appeared on T4 with Vernon Kay and co-hosted ITV's 'Entertaining Elvis' with Sarah Cawood. In 2007 Kevin was asked to play the voice of Elvis for a drama on BBC Radio 4, to commemorate 30 years since 'Elvis - Left the building!'

Whether it's '68 Comeback Special or Vegas Years, Kevin Paul has a choice of dazzling costumes, all personally fitted & created by B&K Enterprises U.S.A. Using the world's finest Elvis costumes compliments Kevin's athletic physique to provide a striking positive visual image of Elvis not normally associated with this field of entertainment. Kevin Paul prides himself on the fact that no two shows are the same, with such a vast repertoire of songs, tailoring a show to suit your individual needs and special requests is a pleasure.

Kevin has performed for a variety of venues/clients, including all major hotels, theatres, clubs, exhibitions, corporate/private parties & festivals. He has entertained small audiences of 30 to crowds of 25,000. He can ensure your Wedding day will be one you will never forget - For all The Right Reasons, many testimonials available on request,(see testimonial page on the website) all with one common denominator, Kevin Paul provides a truly entertaining show!

Just a note to thank you and Kevin for laying on a superb night (Masonic Evening). Kevin was spectacular and interacted with all of those attending. He was even better than than our previous experience. He even spent time having photos with a number of the guests, a real nice touch. Fully recommended to everyone. Kindest Regards - Eddie

We had another great Tribute night from Kevin Paul as Elvis at Moor Hall Hotel. We have booked him over and over again as he is the best ‘Elvis” ever, he has the voice, the moves and the presentation and a fan club! - Jackie Benzecry, Chairman, Breast Friends, Sutton Coldfield

Just a brief note to say how much we enjoyed our Golden wedding anniversary party, with the King on the cake being Kevin Paul as Elvis. It was a truly grand afternoon & everyone enjoyed the party and the entertainment. Even non Elvis fans were impressed with Kevin's performance! We have no hestitation in recommending him, he was excellent! - David & Chris Baker

What an amazing entertainer looks good sounds fantastic and a lovely person I felt 16 years young. The whole golf club was rocking it's been a long time since it was so full, Elvis was the love of my life - best looking man ever and Kevin Paul as Elvis a very close 2nd! Hope to see him again next year when I am Lady Captain - Pat Cowley

Kevin is a fantastic performer, and he actively encouraged and involved everyone in his performance. He even handled the over enthusiastic attention from one of our guest's daughters, who is autistic, tactfully and sympathetically. All our guests raved over his performance - and it made for a fantastic night, (I know others are talking about Kevin performing at their future functions). A great night - made more by Kevin - Martin & Diane Hallgarth, on Behalf of St John's Lodge

Well what can I say, he went down a storm, they all loved him even the non Elvis fans. They soon joined in sang along got up and danced and generally enjoyed themselves.I can now say I was a little nervous before hand as to wether it would be their cup of tea but, I need not have worried. I think he may have a future booking there for other functions and other places as well. Please pass on my thanks to Kevin and tell him he made a great day better. Thanks for all your help - Karen

Wow, where to start! Kevin was simply amazing on Saturday night and put on a show that made my mother-in-law, Christine, feel so special on her 70th birthday. He created such a great atmosphere, some of which I hope is captured in the attached photo, and the party couldn't have been more of a success. Kevin has a brilliant voice, a fantastic sense of humour and really made sure everyone enjoyed themselves. The manager and staff at the venue all commented about how good he was and how well the night had gone, and all the club members that were there too loved him. It was great that he spoke a lot about Christine and also included her sister Rita, whose birthday was a couple of weeks ago. There was so much happiness in the room all night and Kevin really threw himself into the show, and Christine already wants to know when we can arrange the next party for her! Kevin's sound engineer was fantastic - they worked brilliantly together and the music and vocals sounded amazing throughout the show. Thank you so much too for all your help Jackie - you've been great to work with as we put all the plans together, and I've really appreciated the fact that you've always responded to emails so quickly and been really flexible when we've asked for particular songs and outfits, and even when we moved the venue 180 miles to the south coast! I'll have no hesitation in recommending Kevin to anyone who's looking for an amazing show with a brilliant performer! Thank you from me and all the guests - Jonathan Moule

I thought I would drop you a line straight away – we have had great feedback about Kevin (Elvis) this evening. Great act, very professional and personable – a pleasure to work with - Annette Cave, Calcot Hotel Operations Manager

Thank you so much for introducing us to Kevin Paul aks Elvis!! He made the evening! he was sensational and funny! He worked his audiance soo well and his professionalism showed particularly when the unexpected occurs and he has to work through it! I cannot speak more highly of him and would love to have him again though not doing the same songs. So ten stars for Elvis and many thanks - he will be a hard act to follow! We will be in touch again! - Gillian Chesser

Just to let you know that 'Elvis' was great and we had a fab night. I didn't get chance to thank Kevin for a wonderful night, so please pass this on. Lots of comments about how fab he was. Mom had a wonderful time & Elvis was the topping on the cake - Jo

I had to write and say a huge thank you for your brilliant show at my 60th on Saturday night. I had been in bed all week with a nasty chest infection and wasnt overly keen to go out – but boy am I glad I did.Having seen you at a friends 60th I had always said that the only way I would ever have a party would be if you were performing at it – I hadn’t a clue about the party but when I heard that music and knew where I had heard it before – was it Space Oddessy? – I nearly had a fit – the kids said it was hilarious watching me hopping up and down when I realised what was about to happen!! Everyone said what a fantastic evening they had and what an amazing show you had put on.Thank you so very much – I hope from all of those cards you gave out that I will see you again and I wish you every success. Regards and all best wishes. - Linda Tipper

Just to let you know that a fantastic night was had by all. Everyone thoroughly enjoyed their evening and compliments for “Elvis” for flowing faster than the wine.  Already, I am been asked if he is returning next year.  His stage presence was great & the audience really warmed to him. I was particularly amazed how well he interacted with the audience when his act had finished. He shook hands, got kissed and allowed our customers to have their pictures took with him. I thought that was brilliant. My compliments to you for providing a top notch act. Many Thanks! - Johnson's Restauarant - Tracy & Sarah

Kevin Paul as Elvis was absolutely magnificent and I have many emails from friends and family saying just that. I have seen Elvis tributes all over the world and I can honestly say that Kevin is the very best by far. My wife and I first saw him at Moor Hall Hotel earlier in the year which prompted us to book him and we were not disappointed. Not only does he sing just like Elvis, he even looks like Elvis’s twin brother when Elvis was at his best, and he was nothing short of fantastic throughout his two performances, and the number of encores could have kept him there all night. At one stage there was no room left on the dance floor! He has a warm personality and has a tremendous way with people and his appeal has no age barriers whatsoever. Walking through the tables and singing to guests was a very popular part of his cabaret routine and of course all the ladies loved him. Anyone looking for a first class tribute to “The King” should look no further. Kevin is the very best. Please thank Kevin on our behalf and I look forward to seeing him again in the future - Leslie G Leek, Managing Director, Pace Systems International

I would like to thank you on behalf of Lilleshall Hall Golf Club for the fabulous night we had with Kevin Paul performing as Elvis.It was a truly memorable night. He is a consummate performer who can only be described as 'the closest thing to seeing Elvis you can imagine'. I wish you & he continued success. Thanks once again - Nick Collins, Social Chairman, Lilleshall Hall Golf Club

We will definatly be putting some dates together, and Elvis - Kevin was even better than I remembered, everyone was well impressed so thanks to you guys - Paul Skerritt, General Manager

Just a quick line to thank you and Kevin for Sunday. Please pass on our sincere thanks, he made an amazing day even more wonderful. Everyone loved him - Thanks so much - Ann xxxx